Our friends at Thimblemill Library are having an 8 hour Jamathon in aid of Leros Solidarity Network established to support Syrian refugees on Sunday 19th June between 12.00 and 8.00pm.

Here’s the flyer, hope you can get there to support this great cause.

Performing from 1pm onwards Bearwood Promoters are delighted to be curating the music stage at the Picnic in the Park for the 5th year running. 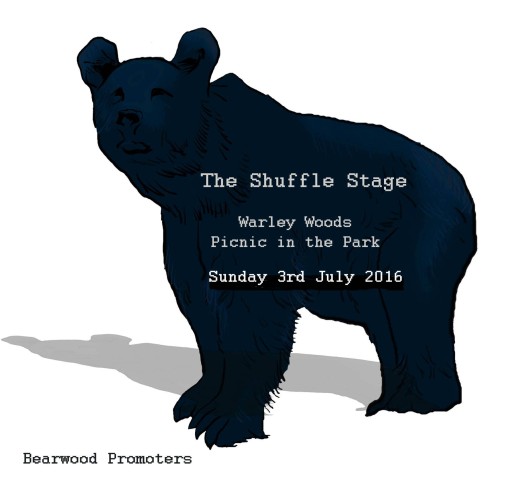 Details of performing artists can be found on our Facebook page Shuffle Stage at Picnic in the Park 2016. Please like and find out more about them.

” They sound like The White Stripes of Mumbai. I love it!’” – Paul Weller

We are very excited about the return (Last played the picnic 2011) of Aziz & Dal to play the Shuffle Stage at The Picnic in the Park just ahead of their of their gig in July at Jodrell Bank’s Bluedot where they will be performing alongside Underworld. Jean-Michel Jarre. Brian Eno and many more.

Aziz Ibrahim’s unusual musical history is a journey unparalleled in rock. From humble Manchester British Pakistani roots playing in reggae, rap and rockabilly bands, he began professionally in Simply Red (then ‘Asia’), and the Stone Roses, then was a songwriter for Ian Brown and Paul Weller – not to mention numerous other stars on the way. These experiences have culminated in his brain child – ‘Aziz’.

Dalbir Singh Rattan, local resident of Bearwood and ‘Viceroy’ of Tabla, is a gifted player from the Banaris style. The power house that is Dalbir Singh Rattan introduces the future of British drumming in the shape of his mighty Tablas. Never has anyone experienced the rhythms and dynamics, not to mention the speed that this man is capable of!

Aziz Ibrahims’ song writing skills and Asian Mancunian guitar playing, coupled with Dalbir Singh Rattan’s exceptional aggressive drum skills, have an energy that that takes their music through and beyond rock punk and indie that has given birth to a new genre of British music ‘Asian Blues’.

Multi-talented singer songwriter from Birmingham Carlton has collaborated with fellow Birmingham musicians – Andy Cox of the Fine Young Cannibals, Paul Foad of the Au Pairs and Kevin White of the Beat and has just finished a tour with Fish, (ex Marillion front man) and has recently toured in Jamaica. Carltons musical influences are various but notably include Bob Marley, Stevie Wonder, Paul Simon, Sting, Earth, Wind & Fire and Leonard Bernstein.

Carlton is currently fundraising for the Refugee Council through his new Single: Troddin

We welcome back the children from the Fused Dance Academy created by Jem n us Danceworks and Animations School of Dance who have fused together to give you the best dance training in the local area! They specialise in all forms of dance and strive to be different, fun and educational.

Rich Stokes has been described as an infectious personality playing quirky songs. He is a musician, performer, writer of stories and songs and plays, comedian, storyteller and actor.

Independent Country are a 7-piece band that formed in Birmingham, in 2015, who play Country versions of classic ‘Indie’ hits from the ‘80s, ‘90s and 2000s. With a line-up that contains the sounds of pedal steel, lush 3-part harmonies, twanging guitar solos, banjo and fiddle, this is a bar-room country band with a difference.

Their 10-track debut LP, “Trailer Park Life”, will be released in Summer 2016; The band are currently preparing a second batch of songs ahead of recording their second album in Autumn 2016, These new songs are currently being added to the band’s live set, which they will be debuting at numerous UK festivals this summer including our own Moseley Folk Festival on 3rd September ahead of their debut LP release.

Bearwood Promoters is a voluntary group of local music enthusiasts funded entirely by audience donations. They aim to develop and nurture a culturally rich musical environment which promotes a range of musical genres and supports a sustainable live music infrastructure in Bearwood. Incorporated in 2011, they have delivered 7 Bearwood Shuffles in Lightwoods Park at the Bandstand and have supported many other music events, including Picnic in the Park.

Bearwood Promoters promote and provide live music in Bearwood and facilitate local music talent to play and be heard.

Bearwood Promoters are open to any musical genre and like to mix things up a bit to give audiences a real taste of what’s on out there. Given this open door approach they are also hoping to continue strengthening community spirit and bringing people together throughout Bearwood. Look out for this year’s activities. Stay in touch on our Facebook page Bearwood Shuffle and website http://www.bearwoodshuffle.org .

If you would like to play at future events organised by Bearwood Promoters or if you’d like to lend a helping hand please email them via bearwoodpromoters@gmail.com

Bearwood Promoters are proud to be supporting Warley Woods Community Trust again this year, by providing the music for Picnic in the Park.

The list of bands will be published soon and as ever, it promises to be an eclectic mix, so there should be something for everyone.

We are fortunate to have 6 Music DJ, Stuart Maconie acting as Master of Ceremonies for the afternoon’s music.

See you all there 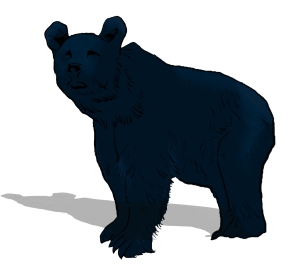 Warley Woods Community Trust organised this year’s Picnic in the Park on Sunday 5th July 2015 between 1.00 and 6.00p.m. This free event attracted large crowds to the live music and assorted food and craft stalls and even a dog show. Bearwood Promoters curated the music stage on behalf of the Trust, and got the 6Music DJ Stuart Maconie to compere the afternoon’s music. 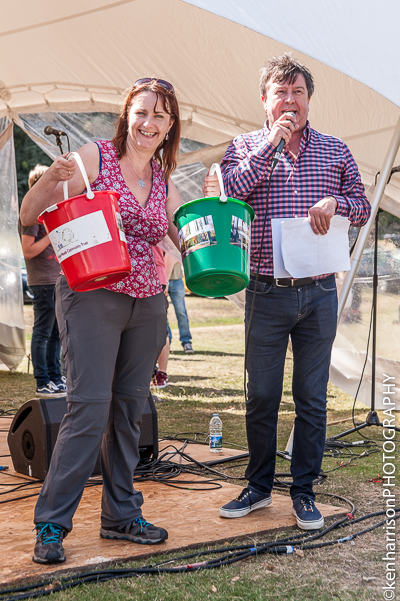 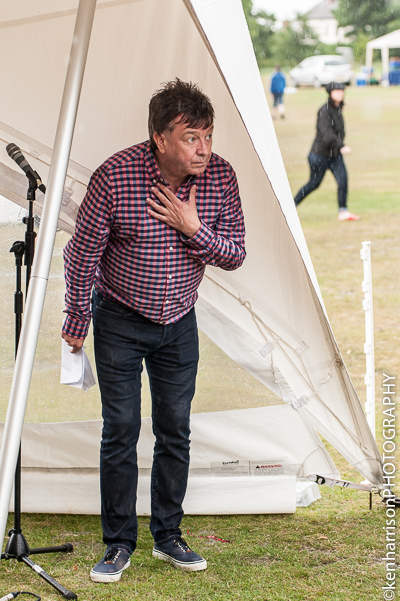 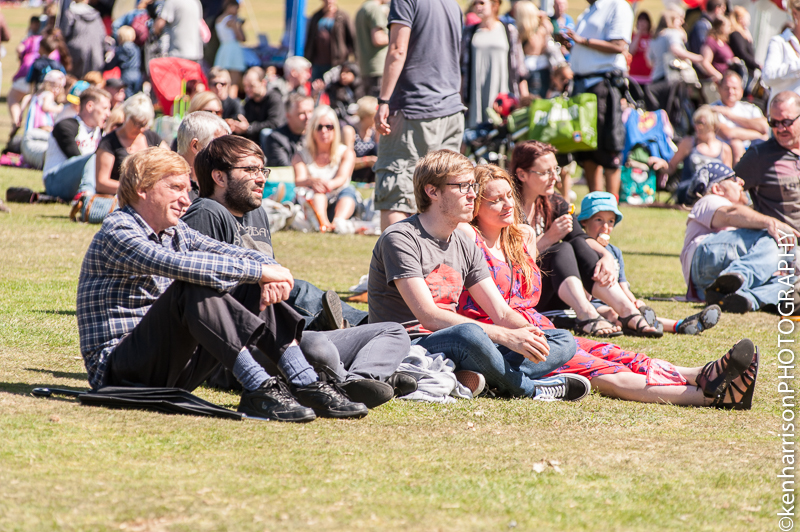 Band and acts appearing were a mix of local talent in and around The Bearwood area; 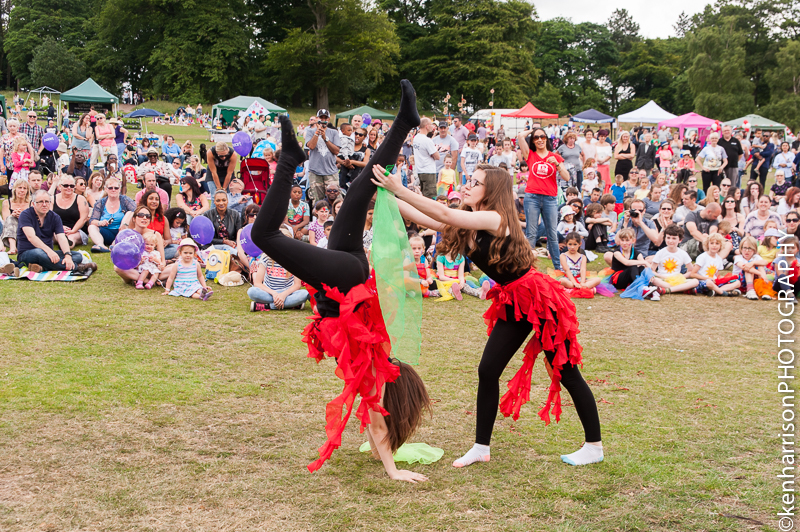 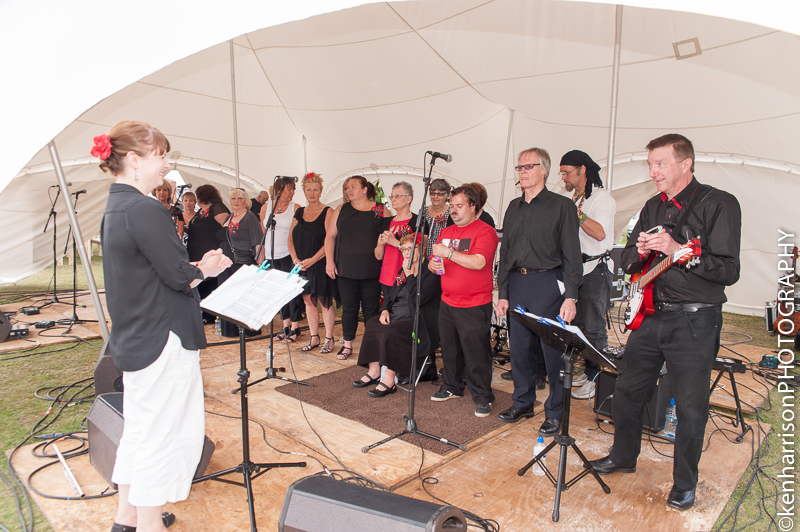 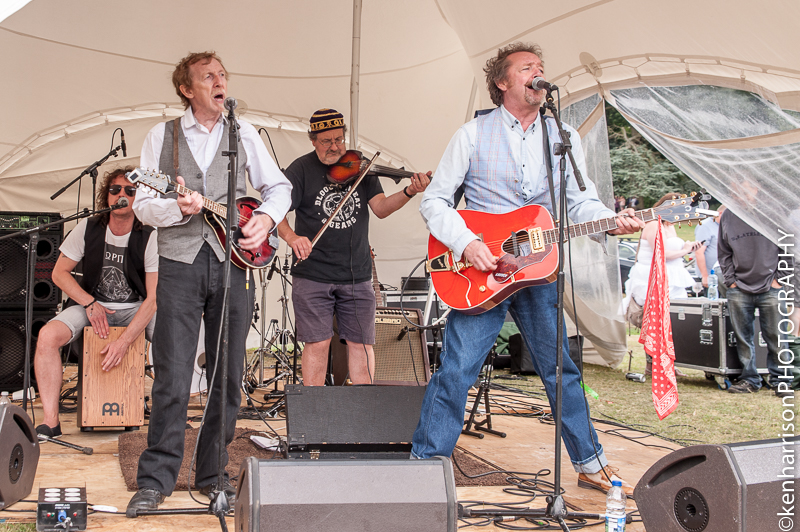 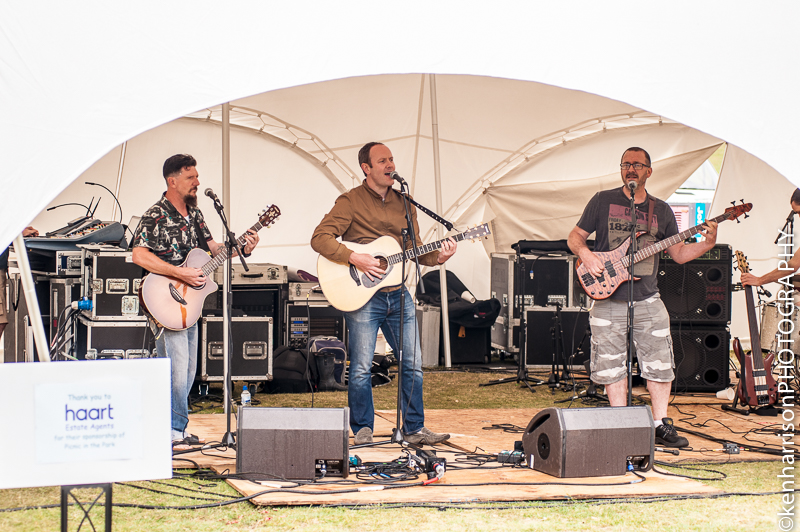 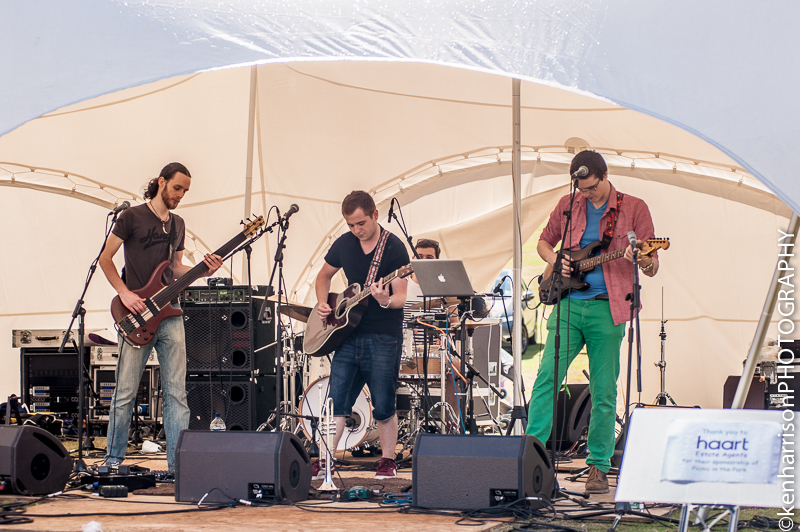 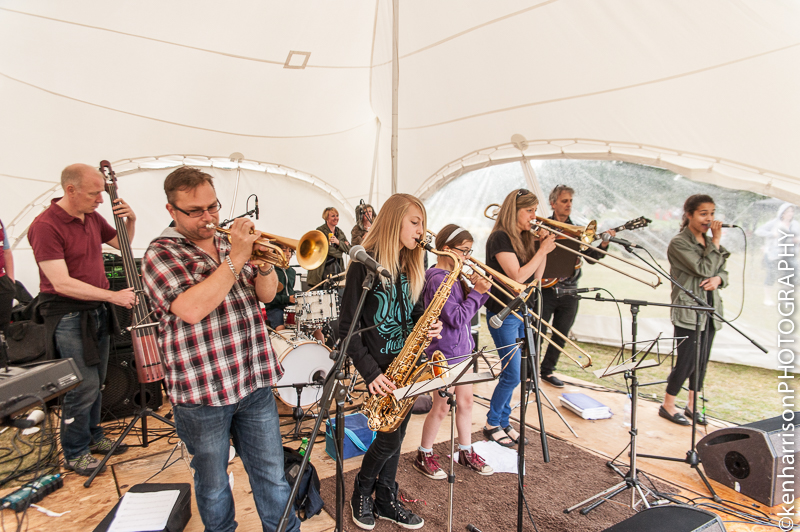 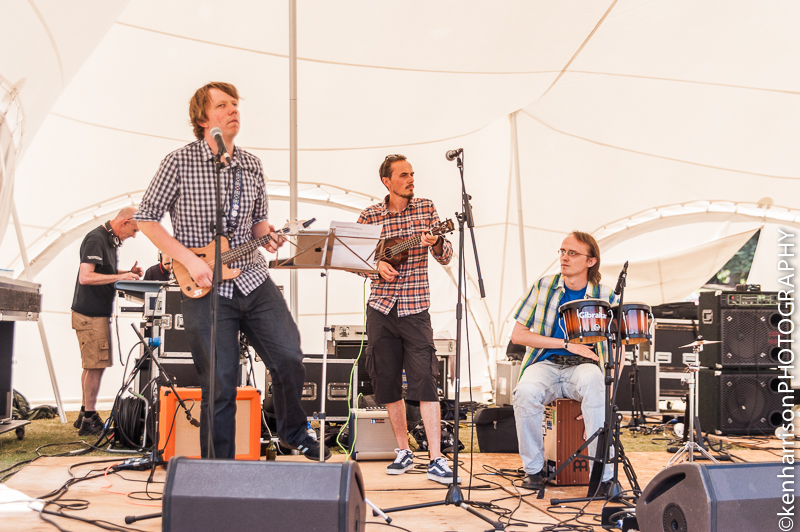 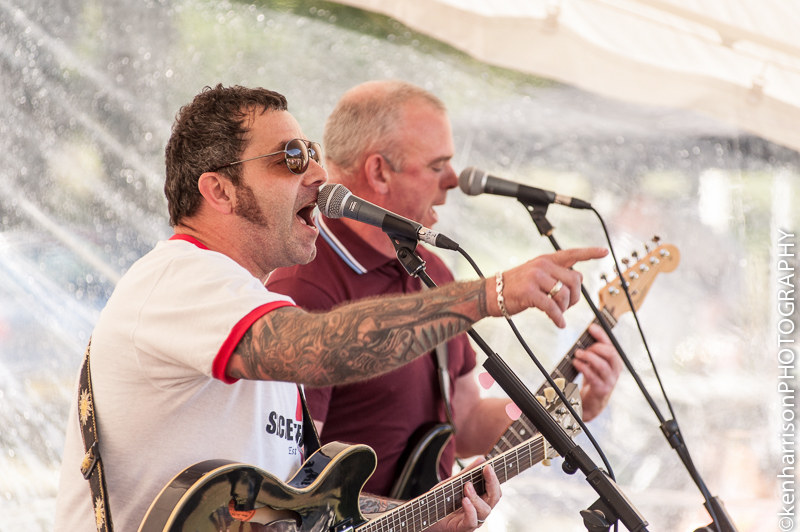 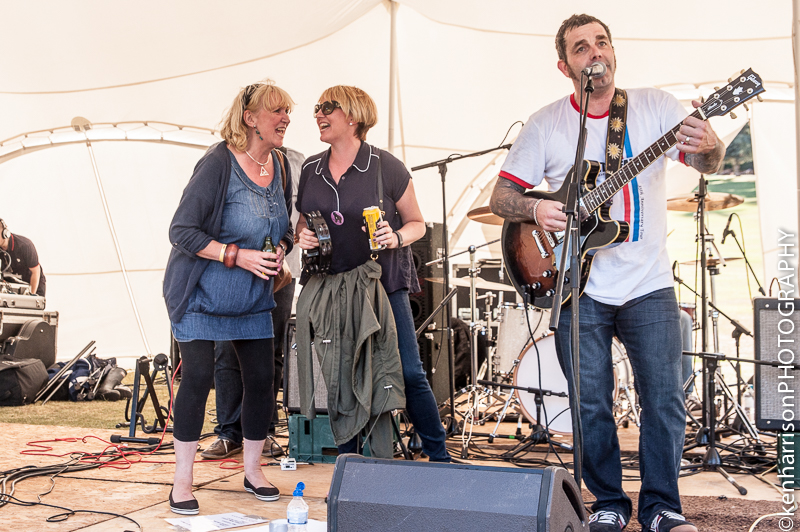 What a day!! The crowds got blazing sunshine, torrential rain and a few thunderbolts too and for those brave souls who stuck it out until the end, watched a great set of acts performing on the Shuffle Stage. 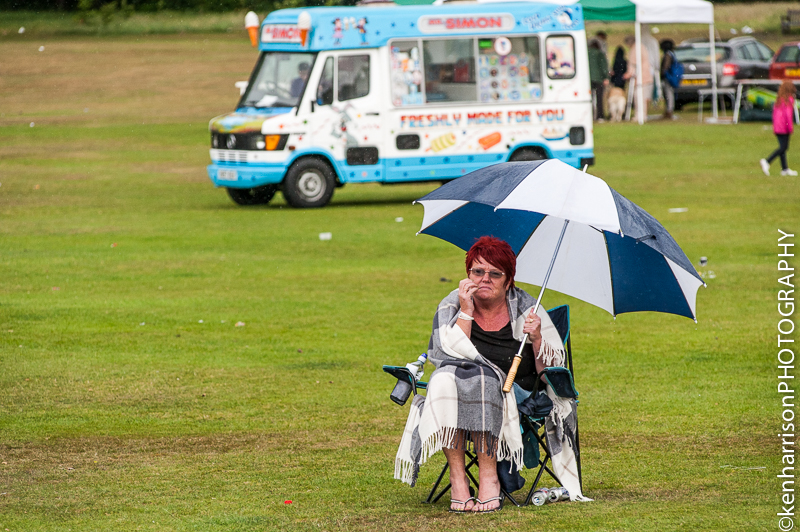 The Bearwood Shuffle is back for 2015 on 26th July, with their usual eclectic mix of live music acts, craft stalls and great locally produced food. Lightwoods Park Bandstand is not available due to the restorations in Lightwoods Park, so this Shuffle will take place at Warley Woods.

Appropriately enough the fifth Bearwood Shuffle saw five great acts take to the Lightwoods’ Park bandstand on a freakily bright and sunny Sunday… you’d almost think it was summertime eh? Moselele kicked things off, an ever growing collective of ukulele players they put their own unique spin on everything from The Killers’ Mr Brightside to The Violent Femmes’ Blister in the Sun. Great fun. 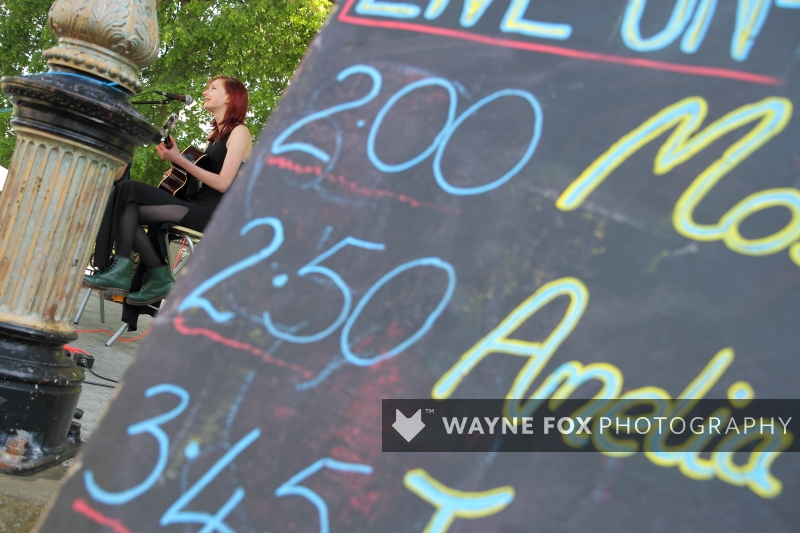 Amelia Wallace stunned the gently roasting crowd with her own songs and covers including a ‘better than the original’ versh of Alt J’s Matilda (so much lovelier than that bloke with the silly voice… I’m sure he’s a terrific fellow but damn it, he sounds like he’s trapped his nuts in a car door). 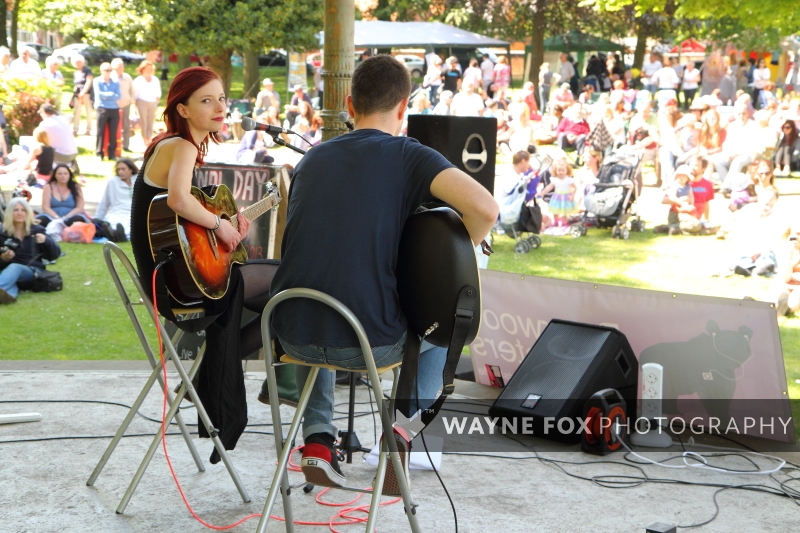 Tempting Rosie served up another delicious portion of reggae‘n’ska ending their set with the classic Monkey Man which even got me dancing. Not something you’re likely to see very often these days. 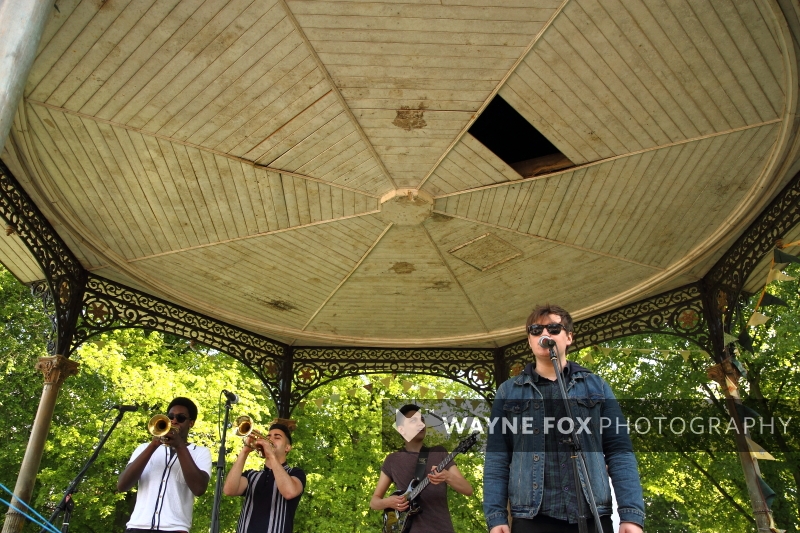 Expect an essential new EP from them very soon. How do you follow that? In line with the Shuffle’s philosophy of mixing things up the legendary Paul Murphy (possibly one of the nicest and most interesting chaps you’d ever hope to meet) kept me pretty much entranced with a mix of songs and poems including my all time personal favourite Shoplifters Talking Blues. 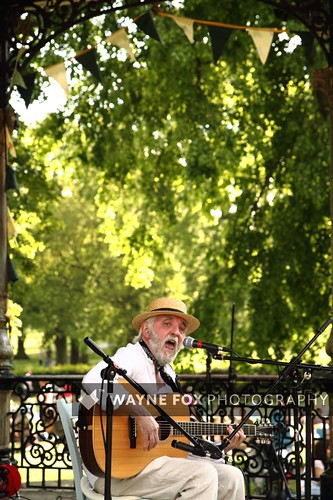 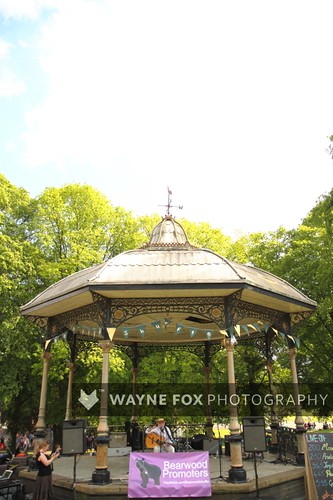 Today’s fascinating fact… did you know that Murph hung around with Lemmy from Motorhead back in the 60s? Nope, me neither. Happily he’s in the process of writing his autobiography (along with several other fascinating projects). Trust me, that’s one book you’re going to want to read. All too soon (tempus fugit) Gucci Pimp rocked things to a close delivering some impressive speaker shredding riffs as the crowd polished off the remains of their picnics. 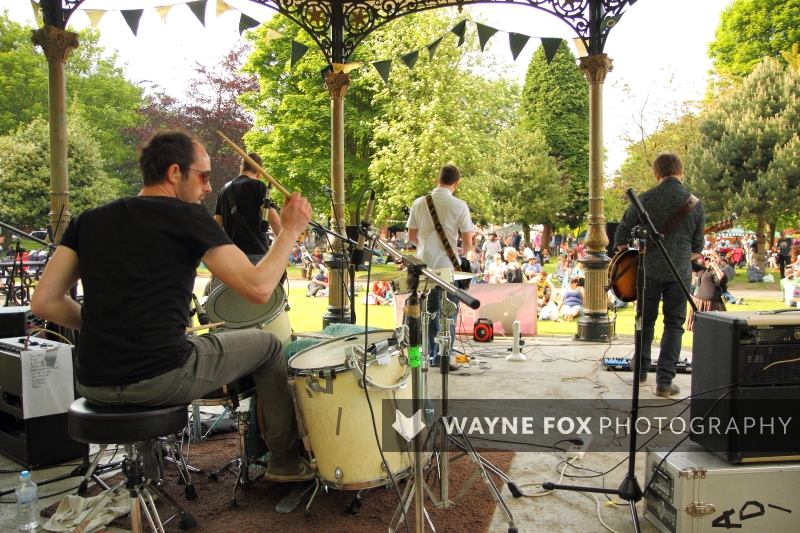 Compere for the day the irrepressible Gavin Young did a top notch job of introducing the bands and DJ Craig (in da park) somehow resisted the temptation of hardcore techno to deliver some suitably summery tunes in between the sets.

Huge thanks to the stallholders, Musoplex for the loan of the sound equipment, all who came along and threw some money in the buckets (including a distinctly chilled out Stuart Maconie from 6 Music’s Radcliffe and Maconie show) and our chums at the best Fish and Chip restaurant in the universe, Chamberlains, who sponsored the event. Without the generous support of all of the above and, of course, then bands themselves these events simply wouldn’t exist. We’ll be back…